Selwyn and his wife Judy launched the book with a function for invited guests at St Andrews Golf Club, Hamilton.

“We went to a Waikato PIA meeting and met the then president Brian Hancock who said: ‘You need to meet Selwyn Mexted.’ “

That’s when he first heard Selwyn talk about the ‘money wheel’ and how properly managed investment could generate much wealth. As a result he became addicted to property.

“Selwyn’s book will be a welcome addition to the property education sector. It will enable those wishing to develop an investment portfolio to take advantage of the vast experience Selwyn has accrued investing in property,” Terry said.

Lawyer Nitin Deobhakta first met Selwyn in 1995 at a WPIA meeting. “He overhead a conversation I was involved in and interrupted to say: ‘Are you going to spend all your life talking about money or do you want to make money?’.”

As a result he began buying property, despite pressure from his colleagues to invest more time in his practice as they believed he would never make enough money out of property.

“Selwyn told me that as long as I had enough to cover the basics of living, it did not matter how much i earned. The true measure of my wealth was: how much did you have at the start of the year and how much do you have at the end?”

Colin Comber, president of the TPIA: “Selwyn started coming to our New Plymouth meetings about 2001 and has been virtually an annual guest speaker ever since. He has become a great friend of our association, giving freely of his time and wisdom from which many of us have benefited.”

TPIA executive member Richard Woodd, a former journalist who encountered Selwyn and Judy on a bicycle trip through the Pureora Forest in 2014, was approached by him at a TPIA meeting last year, saying he had written the manuscript of a book and would he be able to look it over.

He handed me this sheaf of pages hand-written in pencil and I told him: first find yourself a typist.

The typist he found was Tam Hill of Hamilton (now living in NP) who eventually became the designer and producer of the book, while I did the editing job.

Selwyn said he had been thinking about a book for many years and didn’t want to be one of those who went to the grave without having done the task.

“I wanted a book that was easy to read, not too long and that will be timeless.”

Robert Kiyosaki through his books ‘Cashflow Quadrant’ and ‘Rich Dad, Poor Dad’ has been a major influence on Selwyn in understanding the difference between working for money and having money work for you.

Selwyn said his own father did not have great health, never took a risk, had faith in God, loved his family and served his country, but he never had any financial resources. “He was my Poor Dad. Not long after he died I met Arthur Porter and he became my Rich Dad.”

The late Arthur founded the Porter Group which has grown into one of NZ’s most successful businesses.

Selwyn said: “When I met him Arthur was financially poor having been through similar struggles to myself. But he had a wealth of knowledge, always saw a glass half full, who looked to the future, and who said: ‘Never try and solve a really big problem, just write it on a cloud and eventually it will move away.’ “

When he visits other associations as a guest speaker, Selwyn usually goes into the local secondhand book shop to buy bargain bin copies of Kiyosaki and gives them away as prizes to his audience.

One day in the distant future it might be a Mexted descendant giving away copies of Selwyn’s book.

Copies can be ordered from judy.mexted@xtra.co.nz 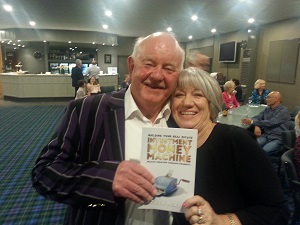